Luke Wright, What I Learned from Johnny Bevan

Evelyn Waugh’s Brideshead Revisited, published immediately post-war in 1945, elegises landscape and lifestyle. The outsider Charles Ryder is drawn towards the bohemian Sebastian Flyte and his house and family. Using flashback, post-war austerity throws the vanished colour of Brideshead into relief. Revisiting Brideshead on active service, Flyte sees that its farm ‘had been marked for destruction before the army came to it. Had there been another year of peace, there would have been no farmhouse, no wall, no apple trees. Already half a mile of concrete lay between bare clay banks, and on either side a chequer of open ditches showed where the municipal contractors had designed a system of drainage. Another year of peace would have made the place part of the neighbouring suburb’. 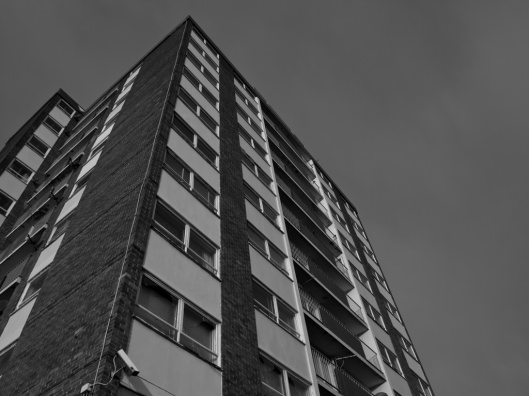 In What I Learned from Johnny Bevan, Luke Wright offers an inversion of Waugh’s novel. The poem centres upon The Grooms, four high-rise tower blocks, revisited by Nick, a music journalist. Waugh’s sombre novel mourns suburbia’s scarring of the landscape but Wright has his sights trained on gentrification, as The Grooms, according to the spiel of the Urbania music festival he is covering for the media, offers ”yurts / and bell tents on The Rec between the blocks.’ / Tilly flicks a switch, the flats light up. / ‘It’s all mod cons, of course: 4K TV, / Nespresso and Egyptian cotton bedding’. As a student, like Waugh’s Ryder, Nick had been tempted to romanticise The Grooms: ‘The sheer scale took my breath: the length of pipes / that scored each tower’s face; the symmetry / of staircase upon staircase upon staircase; / the tiny dot of someone on a landing / far, far above our heads, ten storeys high’ but Johnny Bevan, born and bred there, harbours no illusions: ‘It’s fucking skuzz. / The lifts don’t work. The whole place stinks of piss. / There’s needles in stairwells. Murders happen’.

The poem’s utopia is not a place but an idea – New Labour: ‘And so at last to 1997. / Well-shot of law, I lost whole afternoons / immersed in Modernism: Mansfield, Joyce and Woolf. / All soundtracked by the shaggy krautrock drone / of ‘Beetlebum’, the death of jaunty Britpop’. The souring of the youthful energy and idealism of this election becomes the bedrock of Johnny’s protest politics: ‘But will I vote for UKIP?? Probably not. // But they, at least, address the working class / and challenge Brussels. Why do we accept Brussels? / A fucking super-state that business loves? / Romanians all sleeping ten-a-bed / and working shitty eighteen hour shifts / in Skeggy or some other skuzzy shithole, / sending wages home. Some Worker’s Dream! / But when you call it out they  call you a racist! Bleeding-heart, hand-wringing liberal cunts / shaking your cyber-fists from market towns…’

This poem, published in February, is up-to-the minute stuff. Brexit looms large (there, I’ve said it now – multiple drafts of this review have been keeping the B word at bay, but it’s back) and What I Learned from Johnny Bevan is an eloquent articulation of the sentiments which have lead us to this fork in our path. Furthermore, Wright’s riffing with Brideshead Revisited, together with his Classical epic form, endows the poem with a uniquely mournful gravitas. Understanding what ordinary British people have lost – space, a political voice… hope – points towards the political and social challenges of a generation.

Buy What I Learned from Johnny Bevan from Penned in the Margins.