When the British Library published Love Letters: 2000 Years of Romance in 2012, national attention was drawn to 4 letters written by Charlotte Brontë to Professor Constantin Heger. In 1842, Brontë was in Brussels where he tutored her in French. The letters, dated between 1844 and 1845, were perhaps torn up by a shocked and embarrassed family man. However, in her book, Discourses of Desire, Linda Kauffman ‘provides much evidence that suggests that Heger exploited teacher-pupil relationships on a regular basis with his charismatic personality’ (Zoë Brigley Thompson). Either way, it is thought that the letters, torn asunder by the professor, were later stitched back together by his wife.

In Chrissie Gittins’s poem, Professor Heger’s Daughter,  the scene of the reconstruction is itself reconstructed / imagined with the genteel decorum and the repressed emotion of a costume drama:

The first came in July when the canopy of leaves
cooled the garden in the afternoon,
she laid the pieces on the table
like islands floating on the green chenille.
Taking paper strips she strapped the words together
I shall see you again one day … it must happen since I long for it.
A coral blush rose in her cheeks.

The canopy, the cooling – even the strapping – lend the stanza a temperate restraint which is disrupted by Brontë’s letter that, through the act of destruction, has gained more potency. No longer a single object, it is now ‘like islands’, an archipelago of discrete entities and the torn edges now perhaps signal completion, not destruction. What would motivate the professor’s wife to reconstruct this correspondence? Gittins’ ‘coral blush rose’ suggests the merest slip of her façade – a blush of embarrassment, or a vicarious brush with passion in an otherwise lifeless marriage? The poem ends with the daughter in control:

I keep the letters locked beneath my bed
in a polished leather case.
It’s only in the spring I take pleasure in the trees,
I stroke the buds and stems and will the curling leaves to unfurl into sunlight, to bring a fragrant ease.

There’s a faintly disturbing power to ownership, as the case is polished, suggesting either obsessive handling, or regular care. Either way, the letters have assumed huge importance and, for the daughter, control of these stitched ‘leaves’ is all she can manage as leaves outside run to another rhythm. 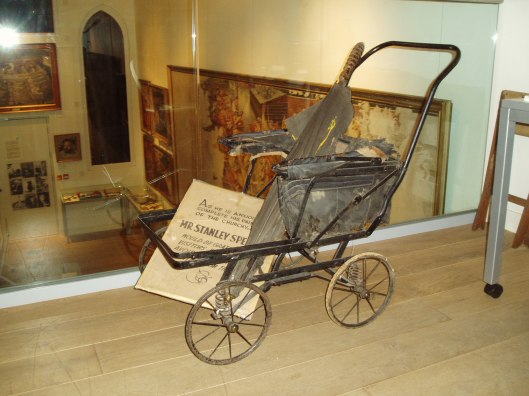 Like Brontë’s letters, the pram used by the English painter, Stanley Spencer, was also deconstructed. In Stanley Spencer’s Pram, Gittins gives it a voice which complains that ‘He collapsed my supple leather hood, / ripped the navy canvas stitched carefully / to my frame’. Gittins finds a controlled violence and perversion in Spencer. Pram has its root in the Latin ‘perambulate’, meaning ‘to walk about’ / ‘to walk the bounds of’ and anyone who’s tried putting a baby to sleep like this knows that, sometimes, it can take quite a bit of walking. A pram is usually a red rag to certain sorts of people, who gravitate to coo and gurgle at its contents. Spencer, frustrated by his status as a local celebrity, had a sign stuck in his: ‘As he is anxious to complete his painting of the churchyard, Mr Stanley Spencer would be grateful if visitors would kindly avoid distracting his attentions from his work’. Fulfilment of purpose is denied to this pram:

‘The May Tree, 1933’ was bad enough –
all those cascading blooms needing to be caught
before they dropped,
but ‘Gypsophila’ (same year)
with days of dots and dabs for each and every flower?
It made me dour, deprived me of my spring.

It’s a funny poem (and there are a lot of really funny poems in Professor Heger’s Daughter). However, like Brontë’s letters, the pram meets an unwholesome fate:

What do I miss now I’m stuck in this museum?
The rushing of the river,
the spread of cedar trees,
cranesbill waving on the moor;
children calling by for autographs,
the way his glasses magnified one eye.
And in the dark – the daylight bulbs
shedding blue for painting through the night.

In this pamphlet, Gittins strikes a glorious balance between plaintive lyricism and vivacious exuberance, between a life lived en plain air and a  sequence of repressive indoor spaces.