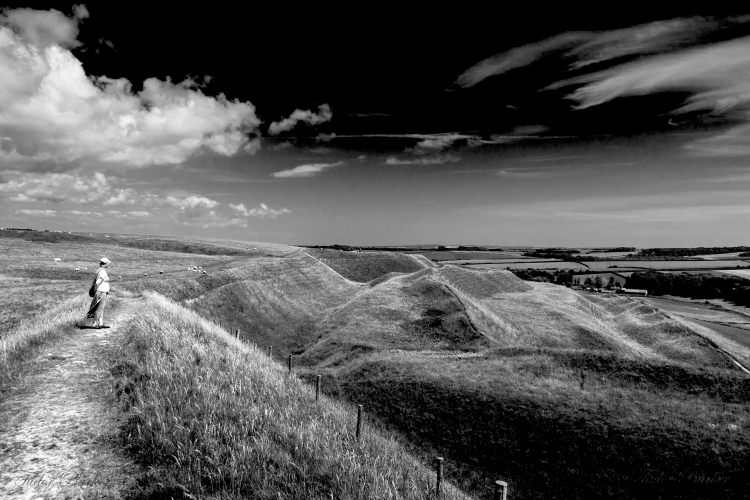 Even today, an assault on the defensive ditches surrounding Maiden Castle would be challenging, their presence serving as a reminder of our darker tendencies. Our underlying savagery, the savagery which made their presence necessary, scars the landscape and in the moan of the wind, the cut of the cold, it’s easy to sense the history of violence. For me, living in the suburban circle of hell reserved for net curtains and off street parking, the landscape’s heartbeat feels faint but Nowheres, David Harker‘s and Tamar Yoseloff‘s pamphlet of drawings and poems, quickens it. 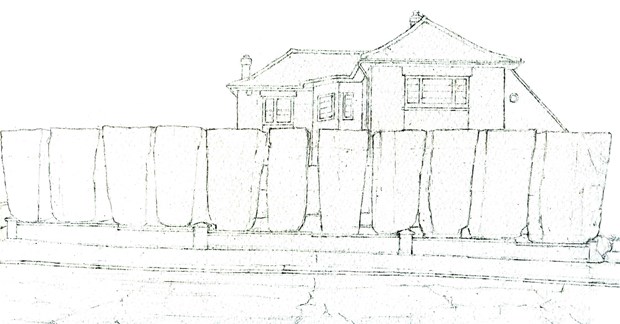 In horticultural terms, the Oxford English Dictionary defines topiary as clipping and trimming shrubs into fantastical and ornamental shapes. However, the humble box hedge rarely serves such a purely aesthetic function and, lest we forget, an Englishman’s home is his castle. I cannot hope to do justice to Tamar Yoseloff’s impeccably clipped shape poem, An Englishman’s Home, in a blog post but the neolithic hedges in David Harker’s drawing, Topiary, give the flavour of its impact. ‘He defends his hab / itation: grows a box / hedge to fence the / lawn, clips arrow / slits to view the / enemy, local yobs / who flail abuse.’ Initially I wondered whether the poem invited me to mock the net curtain twitching sensibilities of middle England. However, those garden shears are a weapon and there’s nothing equivocal about defending property from attack. The day lightens, the tone darkens, and we leave the householder in ‘the hour when / everything is pure, / when he could own / the world, or at / least his modest / patch of perfect / grass, sprouting / the few errant / dandelions that / he must slay.’ I’m reminded of Tony Martin, convicted of murdering a burglar in his home in 1999, and there’s nothing to laugh at about the immaculate box hedges of middle England. The ramparts of the modern castle may be smaller than their Iron Age equivalents, but the turf war between rival tribes is still waged. 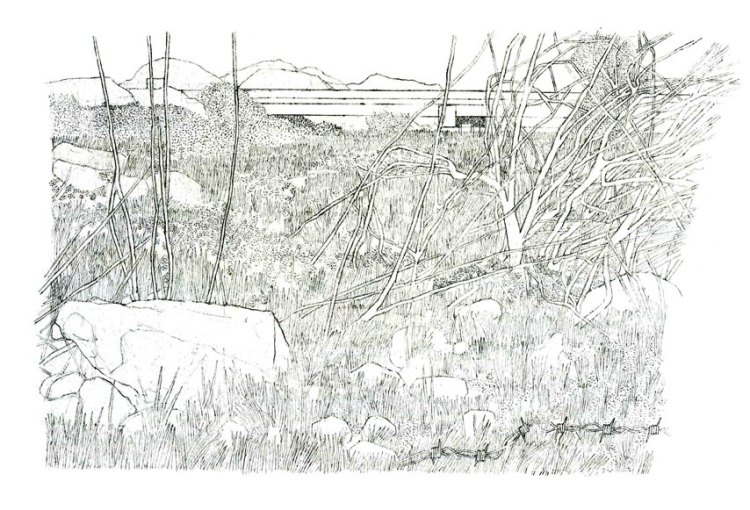 The drawings and the poems offer much more. The opening drawing, AL 151, presents a landscape strangled by barbed wire in the foreground and by monumental civil engineering in the background and, in Yoseloff’s poem, ‘A low building lies // deserted, a place of industry / failed.’ We catch hints of a Mediterranean landscape after the banking collapse of 2008. There’s a truthful weariness to the final prose poem in the Other Landscapes sequence, where the coach tour traveller can’t be bothered with the Classical ruins: ‘These days, he can only take in so many new / things. The guide says something about Aphrodite. He sits in his / seat, stares straight ahead.’ The final poem, Crime Scene, has a Gothic flavour and its suburban ramparts bring us back to the deadly intent of Maiden Castle and Tony Martin as we: ‘Follow the dense hedge / that conceals visitors from the street, / to the front door.’

Drawing the Line. An Exploration of Drawing by David Harker continues at the Poetry Café until 27th June.

2 thoughts on “Another Brick in the Wall: David Harker’s and Tamar Yoseloff’s Nowheres”