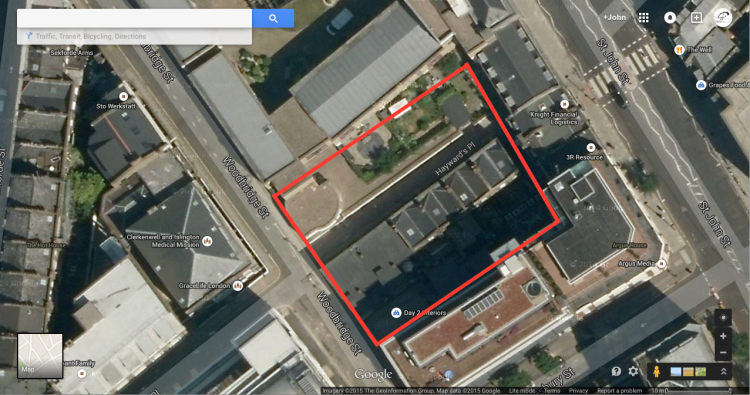 Oxford’s Golden Cross is a Pizza Express now but the interior decor points to its Tudor pedigree. Outside, the square has a palpable theatricality, despite the Vision Express and coffee shop adding two more of its sides. In that Pizza Express, it’s believed that Thomas Cranmer was temporarily imprisoned before meeting his fiery fate by Boswell’s department store, Broad Street. Outside, in that square of shops, locals like to think that Shakespeare performed Hamlet. The inn’s yard is a reminder of how theatre once lived cheek by jowl with the pulsing life of the city. Take Clerkenwell’s Red Bull, once partly open to the air and perhaps, like Golden Cross, an inn prior to its conversion and, like its Oxford cousin, this ghost theatre’s auditorium improbably maintains itself in the twenty-first century – an echo of the past. 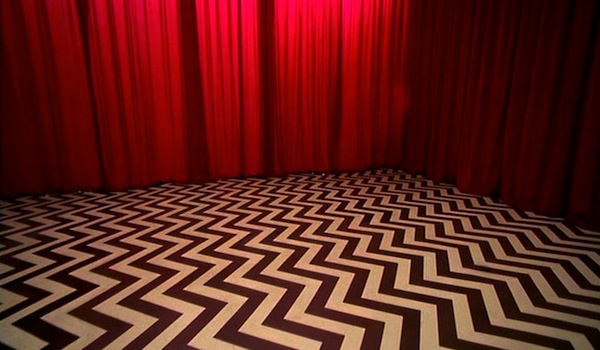 Chris McCabe’s Speculatrix is introduced by the disconcerting Black Lodge Recorder, a Rimbaudian text which references David Lynch’s Twin Peaks and which, like the cult drama, presents a series of disturbing transformations: ‘A black box is a device which has input & output / mechanisms. Its internal workings are unknown. It is of / the starling family & can often be heard saying “Leo, no!” Almost anything can be described as a black box, even the human mind.’ The black box resonates in contemporary culture as the last words from a crash site, voices from a violent past asserting their humanity from beyond the grave, a light shining on the truth of tragedy. However, as theatres like Blackfriars started moving indoors, the black box also serves as a metaphor for theatre itself, the black box from which tragedy will out and out, night after night. Today, perhaps the ubiquitous black box is the TV digibox, the box from which Twin Peaks’ Shelley Johnson, a victim of domestic violence within her marriage, might scream, ‘”Leo, no!”‘ again and again. The poem’s form nods to Rimbaud’s Illuminations and, in John Ashbery’s hands, his Sideshow reads: ‘Expert jugglers, they transform people and / places, and resort to magnetic comedy. The eyes flame, / the blood sings, the bones swell, tears and trickles of red / descend. Their raillery or their terror lasts a minute, or / entire months.’ Rimbaud too observes that drama transcends time.

The collection proper commences with a series of free verse sonnets, each sharing a title with a Jacobean revenge tragedy and offering an additional speech by a main character. In The Revenger’s Tragedy, as the Duke kisses the poisoned skull of Gloriana and dies, Vindice speaks: ‘I’ve seen skulls with better teeth than this     excessive /     in death          as an eunuch’s archived Playboys / After the extraction the black sock in the ditch of the / mouth          a debit of bones cindered in corsets as / Southwark’s   abscess   drains   green   in   the   / Thames.’ Vindice sees a hedonistic eroticism in death and ‘excessive’ carries a sense of immoderate extravagance. As the poem closes, Vindice’s words are direct echoes of the play: ‘O Gloriana     A bone-setter     one / that sets bones together.‘ In the play, Vindice likens the bone-setter to the bawd, reminding the audience of the skull beneath the skin, as the eunuch’s Playboys make him ache for his lost flesh. Absences ache and channel filth, and the city’s ditches and drains allow McCabe to create a fleshy London. (In his Women Beware Women, ‘tubes / cascáde underground,’ evoking both the rats and the warmth of the tube network and the body’s pulsing blood). The reader is then thrown forward in time: ‘     Link me in the rain, where the coachroach of the cab / scratches its back with wipers     Link me because what / are teeth but calcified tíme plugged in pulp & dentine / & gumline          The Glóbe on     Google Earth like a / shitbasin of rivets, a cistern of balconies.’ McCabe London cab, beetling through the water and filth is a truly arresting image and offers the poem a vertiginous, breath-taking scale. The city, the county and the continent spin away into digital miniaturization and the Globe’s once again a ‘noxious and infectious’ sewer, as William Prynne’s 1632 Histriomastix once had it.

McCabe’s poems allow us to see the Shylockean quality of daily life. The light shone into the murky world of payday lending has given us all an insight into the depravity and misery of austerity. In A New Way to Pay Old Debts, Alworth rages against Overreach, and against anyone finding the going tough: ‘You brach     You dog bolt     You hellhound / beats & kicks him     ThIS IS The ANNiversArY / of SELlINg YoUR SoUL TO H+t INsURAncE ApR 549%          This credit card you don’t want has your / name on it     it can be couriered by Three Creditors /     You lean skull     You privy creature     You / sláve to meat.’ As you read on, there’s a claustrophobic quality to McCabe’s language, with the same words and phrases surfacing again and again: zombies, rose, eros. McCabe’s suburban commuters are ‘the zòmbies of / ambition’ and, in this cadaverous updating of The Waste Land, suppurating fiscal and physical corruption take centre stage.

McCabe’s London, his visionary telescoping of Jacobean corruption and mortality with the misery and avarice of our times suggests that what was once theatre has not only been persevered but those theatrical spaces now form the backdrop for the tragedy of the lowest ebb of our daily lives. 5853% APR would have been dismissed as an improbable fiction – even by those bloodthirsty Jacobeans.

Buy Speculatrix from Penned in the Margins