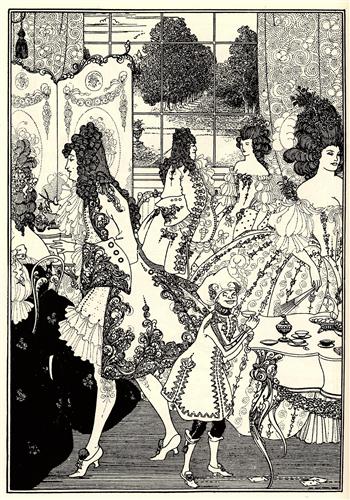 Aubrey Beardsley, illustration for The Rape of the Lock (photo credit: wikiart)

Alexander Pope’s The Rape of the Lock was my first encounter zeugma. Blink and you miss it. Belinda, our flaky heroine, applies war-paint for a ball at Hampton Court, as black omens of dire disaster threaten to ‘stain her honour, or her new brocade’ and perhaps she will ‘lose her heart, or necklace.’ In his 1692 ‘Discourse Concerning the Original and Progress of Satire,’ John Dryden writes, ‘How easie is it to call Rogue and Villain, and that wittily! But how hard to make a Man appear a Fool, a Blockhead, or a Knave, without using any of those opprobrious terms!… there is still a vast difference betwixt the slovenly Butchering of a Man, and the fineness of a stroak that separates the Head from the Body, and leaves it standing in its place.’ If Pope’s Belinda is a thinly veiled portrait of Arabella Fermor, then perhaps she would have smiled at Pope’s narcotic mix of perfumes, unguents and heaving beauty. However, Pope handles light and shade like a water-colourist. At best, his zeugma trivializes the young beauty and, at worst, points to a grotesque level of self-absorption. 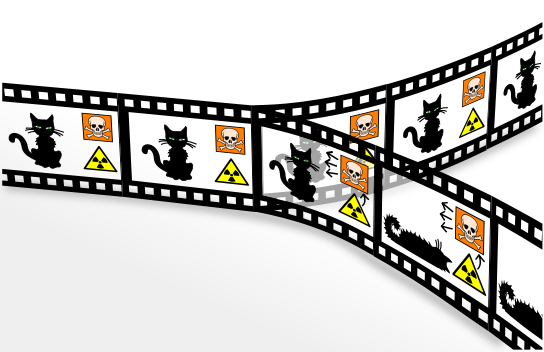 INSTANT-fLEX 718 delivers similar pleasures and showcases Heather Phillipson as mistress of the biting one-liner. In ‘Actually, I’m Simply Trying to Find My Dressing Gown Sash’ we read that ‘Only runners / should be up at this hour, running for their lives.’ With her deft stroke, Phillipson defamiliarises the day-to-day, inverting it into something dark with mortality snapping at its heels. Nothing is taken for granted in Phillipson’s universe, a universe which feels informed more by Schrödinger’s cat than the good old Newtonian universe we kid ourselves we can take for granted: ‘Matter can’t vanish. But, having checked my waist / (coffee percolator, compost heap, plug hole, deep freeze, U-bend, / consulted the moth with a philosopher’s expression on the door mat / (dead)), what’s left in this place to frisk or rely on. // Best to walk off in a straight line towards a recollection / of the bird feeder.’

Phillipson’s warped suburbia brings to mind Luke Samuel Yate’s 2013 pamphlet, The pair of scissors that could cut anything. ‘The Baby [hereafter referred to as ‘The Baby’] hereby contracts with The Mother [hereafter referred to as ‘The Mother’] -‘ finishes with the horrifically ambiguous ‘the Baby doesn’t wonder when / The Mother will stop thinking of her, The Baby, as The Baby.’ At least with Pope the direction of the thrust was clear but Phillipson affords her reader with no such luxury. She leaves her universe in absolute uncertainty.

The Poetry Book Society has curated twenty exciting voices for the future in its Next Generation Poets, 2014 and further information and resources on Heather Phillipson are available here.