The Resurrection of the Soldiers, Sandham Memorial Chapel, Burghclere (Photocredit – The Church on the Corner)

If you’re ever on the A34 near Basingstoke, then consider stopping at Burghclere. The main road is unchanged since painted by Stanley Spencer in 1930 and, behind the austere façade of the Sandham Memorial Chapel, is a floor to ceiling explosion of oil on canvas which masquerades as a miniaturized Camposanto. The altarpiece, The Resurrection of the Soldiers, shows the soldiers of The Great War shaking hands with one another and basking on the mud, as if they were in the sleepy graveyard in Cookham. Yet, for all the altarpiece’s somnolence, the effect of the chapel is overwhelming. It’s easy to become anæsthetized to the symbolism of the cross when deployed in its thousands. However, the soldiers’ laying down of their crosses turns them once again into the burden that the stumbling Christ dragged up the hill to Golgotha. And so Spencer’s vision of love is, at the same time, the memory of a thousand crucifixions.

In The Death of Harry Patch, Andrew Motion memorializes the oldest British veteran of The Great War. The title immediately destabilizes the reader, as the first verse presents the moment of the big attack in the vivid detail of the present tense. ‘When the next morning eventually breaks, / a young Captain climbs onto the fire step, / knocks ash from his pipe then drops it / still warm into his pocket’. The warm pipe echoes Orborne’s agonising wait in the dugout before the trench raid in RC Sherriff’s Journey’s End, fuelling our preconceptions of the deadly moment. However, not all is as it seems in this stanza, as the morning ‘eventually breaks’ implying that, unlike the countdown to an attack, this particular morning has been longed for. In the stanza’s final line, the young Captain ‘places the whistle back between his lips’, suggesting that this is where the whistle belongs. Instead of the sound of a whistle, Motion gives us ‘A very long and gentle note’ and the ‘hundreds and thousands of dead who lie there // immediately rise up’. One would expect the dread trumpets of judgement to signal Armageddon and this is why Motion’s ‘gentle note’ evokes Spencer’s sleepy home counties resurrection. ‘They have left a space / for the last recruit of all to join them: Harry Patch, / one hundred and eleven years old, but this is him // now, running quick-sharp along the duckboards’. Motion’s ghostly moment is pitch perfect, as Patch was our last link to what seems now like a distant past but, as the army is demobbed, Motion’s padre offers them not absolution and communion but ‘a wafer of dry mud’, the only appropriate symbol of the soldiers’ shared, bitter experiences on the churned ground of the battlefield.

US Marines Corps (USMC) Marines from the 1st Battalion, 7th Marines (1/7), Charlie Company, Twentynine Palms, California (CA), cover each other with 5.56 mm M16A2 assault rifles as they prepare to enter one of Saddam Husseins palaces in as they takeover the complex during Operation Iraqi Freedom. (Photo credit: Wikipedia)

Laurels and Donkeys, the first section of the collection, sees Motion ranging across the conflicts of the last hundred years, working to great effect with documentary sources as he did in The Cinder Path’s Coming in to Land. The decision to work with prose sources whose names are left until the acknowledgements allows the collection to give voice to the unknown soldier and the immediate, direct voices suggest the British Army’s continuity of service and sacrifice. Motion refuses to rework the material into a pleasing shape and leaves the men’s incredulity to deliver the shadow of an emotional impact. In The Vallon Men, for example,  we read that ‘On the gently sloping hill behind Norton Manor barracks, / home to 40 Commando, three trees, one for each marine, / have already been dedicated to the memory of those killed’ and, as fourteen more were planted, Motion ends the poem with, ”It was a very hard tour’, said Gavin Taylor, aged twenty- / eight and a father of three. ‘We have lost a lot of friends. / And we have seen a lot of things that are not ideal”.

The collection’s final section, Several Lifetimes, is also haunted and in A Glass Child, dedicated to Motion’s English teacher, Peter Way, the school children explore the spaces which the school would rather keep off-limits. ‘On the landing in the dormitory above the classroom / in the Old Labs that science had long-since abandoned // two school friends as restless as I used to be took turns / with me, climbing on one another’s shoulders and staring // through the trap-door everyone else had failed to notice’. That Motion labels the classrooms as science labs invites the reader to see the young poet as discovering Narnia while his peers pursue more Earthly activities. The glass child in the attic, living in the speaker’s imagination, also invites us to think of Rabbi Judah Loew ben Bezalel’s creation of the golem of Prague to stave off antisemitic attacks. Motion’s poem does not point to bullying but its language is one of exclusion, or exclusivity. As the speaker explored the dust in the attic, we read that Peter Way ‘broke into my head, and a light swung // over the lumber of knowledge I did not realise was mine’. The language is violent and intrusive but Motion’s geography is precise, as Way’s classroom is a floor below that dormitory in the Old Labs. The layers are aligned, inviting us to view  Motion’s awareness of the glass child as beyond his head, beyond his consciousness, perhaps? With disturbing precision the glass child, Motion and the school teacher combine. ‘Overhead in the attic I heard the child assemble himself / and pace softly to and fro across the creaking floorboards, // humming the high music that was like a finger rubbed / around the rim of a goblet. At an equal distance below me, // in the hushed classroom where a square of wooden desks / crouched in the moonlight, Peter Way moved very quietly // in rotation. He was expecting and answer from each of us, but first we had to guess his question. When it was my turn // I would think of nothing he had not understood for years’. 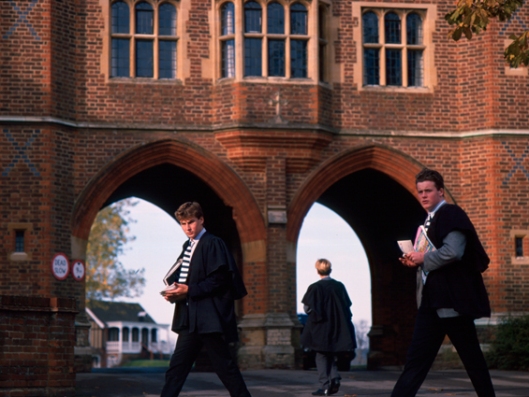 I was at Radley College, Motion’s old school, a couple of weeks ago and I passed underneath the Memorial Arch, inscribed with the names of the school’s Great War dead. In the far right column, my eye was caught by the name of Patch. Now the humble Harry Patch left his school in Somerset in 1913, so it’s not him but I felt the echo of coincidence, influence and Motion’s own schoolboyish presence as he glanced at the same memorial day after day. The Customs House is a spare collection of poetry, yet it evokes time and place with precision. Motion allows voices to speak for themselves and shapes his material with the gentlest of touches. The results are as fragile and beautiful as cut glass.

Buy The Customs House from Faber and Faber